This website describes the work of the Suffolk otter group.
We are volunteers studying Suffolk otters in all sorts of wetlands across the county.
Follow the links to find out more about our research into otters’ diets, lives and behaviour.

We greet summer 2020 with a new logo – huge thanks to designer Ed Hemphill for his skill and flair.
We love it!

General introduction to how we started, where we’re working and what we’re doing. 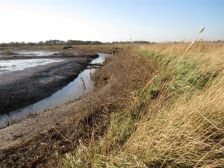 Suffolk’s estuaries and rivers, coastal marshes and reedbeds seem to be very otter-friendly places.
We’re constantly discovering more about how they use these beautiful wetlands.

We’ll post information here about new places and behaviours as we discover them. Come back and visit often.

Some very skilled photographers are part of our group and their photos appear on this website. Current photos are by Dennis Brown, Adrian Hinchliffe, Jamie Hall and Arthur Rivett. Many otters have collaborated by switching on remote cameras and taking films of themselves – with a bit of help from our stalwart vols. 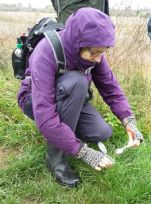 We’re trying out new approaches, and learning from other people. We’re finding out more than we ever thought possible about fish bones and our results have brought some total surprises.

Dead otters
What to do if you find a dead otter. It’s sad, but researchers can find out a lot from them, so you can help otter conservation by reporting it. Click here to find out how.

This website has been part funded by the
Amenity and Accessibility Fund of the AONB.

... to the Suffolk Otter Group website. If you want to study otters in your area, please get in touch.

Corona virus is affecting us all in different ways.
With all SWT and RSPB nature reserves closed – our camera monitoring activities have been severely reduced. A few of us are lucky enough to be able to include some riverside walks or cycles in our daily exercise – and are still getting our otter ‘fixes’ through real sightings or through monitoring cameras. Have a look at the gallery pages … March 2020

We were thrilled to get a grant from SNS to help us buy more cameras for a project joining up the upper Blyth with the estuary, trying to figure out how the otters use the whole river and its associated tributaries.  March 2020

Sad day for conservation
22nd October 2019
One of the most entertaining, enthusiastic and creative conservationists has died.

Richard Woolnough was one of the instigators of this otter study group and its main driving force. He spread otter enthusiasm far and wide, and introduced many of us to the delights of washing and analysing the contents of otter spraints.
His enthusiasm was infectious and he was tireless in his support for groups and individuals wanting to study otter ecology  He always asked searching questions, was clear about what he thought and loved debate.

Thank you for everything Richard, we will miss you sorely.
November 2019

Big boost for otter studies at Carlton Marshes, June 2019
We’re very grateful to have been awarded a grant to pay for trail cameras and microscopes to help volunteers monitor otters at Suffolk Wildlife Trust’s reserve at Carlton Marshes and share findings with the community. The generous grant comes from Love the Broads, the visitor giving Scheme for the Broads National Park.

Want to join in and help? Contact Suffolk Wildlife Trust at Carlton.
June 2019

RSPB Minsmere 2019
hosted another series of early morning walks to look for signs of otters and to discover what’s been caught on the trail cameras.

Film-and-talk tour
Meg Amsden’s short film which premiered at the August 2018 Folk East festival, compiled from footage from lots of members of the Suffolk Otter Group, will be touring community groups in Suffolk in late 2019-2020.

Out in the day… but…
as you’d expect, most of the otter records sent in to the website are of daytime sightings. But our trail camera evidence is clear that at most sites the otters are much more active at night. Only Minsmere bucks this trend.

Urban otters?
From the Gipping in Ipswich, Andy C. wrote, “Watched 2 otters swimming/ feeding for 30 minutes in the river. Spotted single otter on same stretch of river 4 weeks ago and had been checking every night since then for more sightings. Very pleased to see a pair so close to town.”

Seen on the road
(June 2019)
Paul C wrote: “I was driving to work this morning, approximately 6.30 am and ahead in the road was what I thought was a cat. It was picking at a pheasant which had been run over. When I got closer I slowed down to a stop as it didn’t move. I was surprised to see that it wasn’t a cat but an otter. I live in Cockfield and have never heard of otters in this area. It looked at me and then made its way quickly into the undergrowth on the roadside.”

Minsmere otters on TV!
10 days before Christmas 2017, ITV News contacted the RSPB to get a story about the revival of the otter population in Suffolk.
They interviewed Richard Woolnough – heroically risen from his sickbed and throwing off his ‘flu for the occasion. Richard’s been monitoring the otters on the reserve for several years by camera and spraint analysis. He found some lovely fresh spraint for them all to sniff; the journalist was clued up and interested and the film crew got some great  footage of the sunset – even though no otters actually took the chance to shine in front of the cameras.
It was screened in January 2018.
Click here to see the crowd in Island Mere hide.

Is this their first swim?
A fisherman (and otter enthusiast) was lucky and skillful enough to catch this extraordinary film of an otter family on the Upper Waveney in November 2017.
Click here to see it

NEW!! Our (very basic) guide to the bones and other remains we find in spraints. See the Diet section of the Surveys page. (A more advanced version follows. So if you’re joining the ranks of the seriously obsessed – WATCH THIS SPACE).

Very useful discussion at SWT Lackford Lakes with Richard West of the River Lark Angling and Preservation Society. We heard more about the effects of signal crayfish, and how they’re removed; and about the improvements to habitats along the Lark. Good news.

Utterly delightful article by Hans Kruuk about the possible early domestication of otters in South Sweden – evidence from cave art.
Find the article at www.otterspecialistgroup.org/Bulletin/Volume25/Kruuk_2008.html

Two Sunday morning drop-in sessions at Minsmere’s Discovery Centre went well.
More than fifty people came in over the two days and were able to watch recent videos of otters on the reserve, learn how to recognise otter spraint (by sight and smell), to see how we process it and to have a go at identifying what the Minsmere otters are eating.
See Gallery page for pictures.